Happy Father's day to all!

With a predicted high of  90 degrees and the release at Stilesville cut back to under 400 cfs the choice of where to fish became less complicated. A 400 cfs release won't cool the BR much below Stockport (if that).  So, you have the UEB  the WB and a short stretch of the BR.  The rest of the system (BK, BE, and BR below Stockport were clearly out of bounds due to temps in the mid 70's.

Arrived at camp just before noon, had lunch and headed out into the 90 degree heat and bright sun (even I wondered why).  Stopped at Shehawken and checked the rocks for Iso husks, found quite a few and decided to give it a try - bad idea - in two hours - nothing.

Talked on the phone with Rick from the Troutfitter (there were a bunch of Troutfitter regulars down here on Father's day passes).  He had bugs and rising fish up in the sulfur zone.  That was two more things than I had downriver so I drove up.  It was like fishing in a well stirred pot of spinach.  They raised the river to almost 700 cfs (the trout thank you) and all of the accumulated Algae and debris was in the water (along with an assortment of bugs).  There were rising fish and it probably would have been fun if the fish liked salad.  They don't you had to clean the algae off your fly before every cast to have a chance of catching a fish.

Things shut down about 6:00 and I headed downriver hoping to find cleaner water, bugs and more rising fish.  Sometimes, " two out of three ain't bad".  There were bugs and rising fish in the same slurry of Algae that was upstream. Waded out near the top of my waders to reach rising fish in the high water, was so cold my hands were shaking when I changed flies, drove to camp with the heater on  - - - and a smile on my face.

This 20 inch brown was fish of the day! 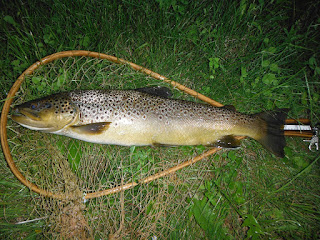