It wasn't a total washout afterall.

Spent over an hour in the early afternoon tying iso duns and emergers for a renewed assault on the big river 'bows.  Just as I was finishing up at the tying bench, a bolt of lightning and clap of thunder put my plans on hold.  The grounds crew was quick to roll out the tarps so the infield is dry.  If it stops raining we'll try to get the game in.

3:00 pm.  The weather radar doesn't look good and the current prediction is for the rain to continue until eight thirty tonight.

5:45 pm. When the thunder and lightning were but a memory it continued to rain - hard.  It wasn't until after six that the rain let up enough for me to drive down to the river for a look.  The river was up but clear.  The fog was too thick to see anything from shore so I suited up and waded out.  The isos  must have waited for the rain to let up as there were a good many on the water  long after the hatch should have been over.  The fish on the far side of the river (well out of my reach) were chasing nymphs with splashy rises while my side of the river had isos floating by me with no fish on them.

Had a nice rainbow eat a blind cast, sit still for a full minute, and then take off straight downstream without stopping until 50 feet of backing was off the reel. It turned out to be a fat 15 incher.  Spent an hour trying unsuccessfully to reach the fish on the far side before calling it quits.  Was wading back to the car when a fish rose and refused my iso.  Put on a spinner that was ignored and then tried a cahill.  The fish came up slowly, ate the fly and and settled back down and didn't move.  It was not a spectacular fight but a long one. The fish never moved fifty feet from where he was hooked but he didn't come within netting distance for a long time. 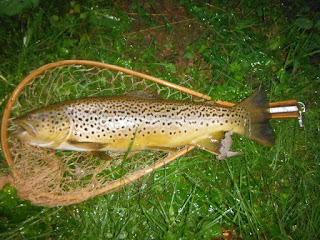 Big river browns this time of year are seldom caught on dries, and this 20 incher  didn't like posing for the "fish of the day" photo one bit.
SHARE: