You're never lonely on a trout stream.

Split the day between the BR and the UEB.  Fished noon 'til four on the BR just below a take out where there were three trailers parked.  There was one drift boat in the area I fished.  They put in at the take out above me and floated past me shortly after I started.  They were the only fishermen I saw on the BR.  At about four thirty I drove from Hankins to Roscoe and then down the Beaverkill.  EVERY pool on the BK had anglers.  The parking lots of the named pools had multiple cars.  Even the "no name" pools had fishermen (it is Memorial Day Weekend you know). At Jaws I turned up Route 30 along the UEB and the fishermen disappeared.  The Hendrickson's are over, the Drakes have yet to begin, the water is at two hundred cfs, the river is in the doldrums and everyone knows it.
If I was looking for march browns, sulfurs, gray foxes and green drakes I was in the wrong place all day.  If I was looking for solitude I found it in both places.

The Bugs?   Avoided me like I was a can of Off.  Nothing but a sparse hatch of caddis on the BR.  Didn't see more than half a dozen march browns and nothing else.  On the doldrum plagued UEB, there were a few small olives and a near dark spinner fall of modest num

The fish?  On the big river they were chasing something subsurface and were taking with a hard boil.  Had zero takes throwing everything I had at the boils.  On the UEB my early casts at rising fish were totally ignored.  When I got down to a size twenty olive emerger my flies caught their eye, until the spinners fell.  Spinner falls are usually a time of unbridled joy for the dry fly angler.  Not tonight. If my spinners were looked upon with scorn I didn't notice.  Never even got an indignant refusal. The fish just relocated and kept eating the tastier real things.

The fishing?  Better than you might expect.  On the BR I struck out on the fish making the big boils but did fairly well blind casting.  On the UEB I had some adjustments to make with the low, slow and clear water and fish that had seen their share of fishermen the past three weeks.  Started slowly, then did well on my little emergers and then struck out at spinner time.

A 20 inch brown on the UEB ate a size 20 olive emerger to win fish of the day over a 19 inch rainbow from the BR that ate a gray fox.  If I get instructions from someone I'll tack on photos of both. 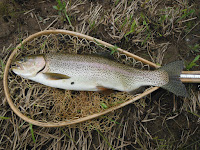 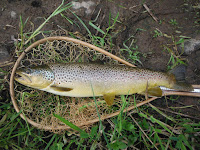