Though I have way too many fly boxes, small plastic containers, wallets, Zip Lock bags, and a large Skagit Fly Wheel stuffed full and overflowing with flies, I still can't say no when I see a fly pattern from one of many artisan fly tyers that I follow that I just have to try.

That's what a positive balance in PayPal is for, right? 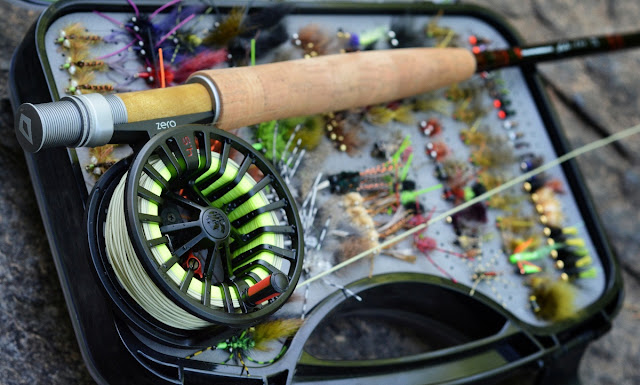 Supporting artisan fly tyers is beneficial in a few ways.  First, it supports an after work, which sometimes grows to a full time, cottage industry.  Second, many of these creations just swim better, float better, and even though it means more to us than the fish, look better.  Third, artisan flies are tied with better hooks and higher quality materials than what you're pulling out of the bin at your local thrift sport shop.  $1 flies are $1 flies for a reason.  Fourth, even if they are more expensive, and they certainly can be, there's just more mojo in one of a kind flies that come off the creator's vise.

Here's a quick breakdown of eight favorite tyers to give a look at as you're filling fly boxes for the upcoming summer season.

WARMWATER SPECIALTIES
You likely already checked out the various flies of Eric Snyder of Warmwater Specialties the other day in "10 For Spring" but they are worth a better look in this photograph as he offers foam patterns large to small that just float great, make excellent noise, and get the attention of bass and bluegills. 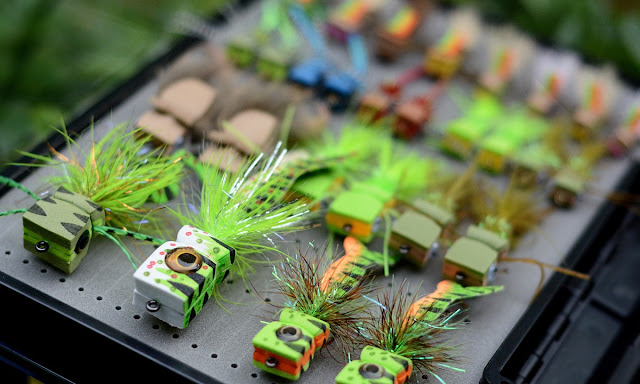 STEELHEAD STEVE'S SMUGGLER MOUSE
I like mice patterns a lot for trout and whatever else will chomp them and when Steve Yewchuck's Smuggler Mouse popped up on Instagram, I knew that I needed a half dozen to play with.  These are going to chug top water quite nice I believe. J&M FLIES - ROADKILLS ROCK
Do a search on T.F.M. for "Jeff Price" or "J&M Flies" and you're going to see a few posts on his most excellent poppers but another pattern that deserves a slow hand clap is his "Roadkill" pattern.  They are a warmwater head turner and worked great on the trip which was highlighted in "Native Sons". 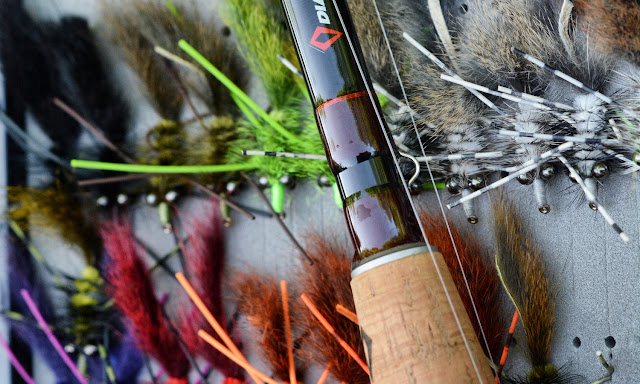 I'm not sure if Jeff is taking orders, as I know he's been working through a HUGE stack of back orders, but when he does, get yourself a dozen of these in assorted colors.  Maybe I can get Jeff to put together a step by step tutorial for a future T.F.M. post.

FLY FISH FOOD - CLARK'S GOT SKILLS
Clark is one part of the Fly Fish Food crew and when he posted on Facebook that his lawnmower and washer went kaput on the same weekend, I sent some PayPal funds his way asking him to put together an assortment of flies for me to play with.  A couple weeks later a small parcel arrived with a couple dozen patterns inside along with two "Comrade" inspired Sliders just to show you the kind of skills he's got. 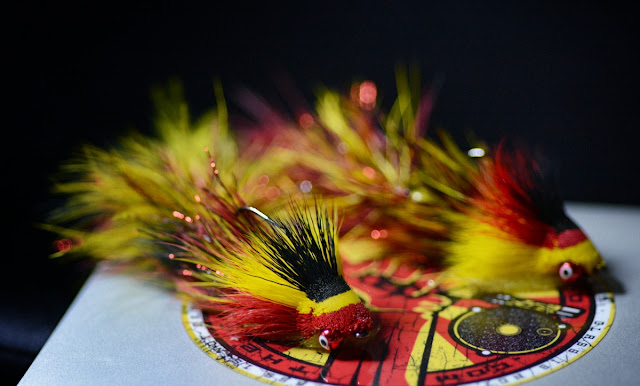 TRUST THY GUIDE - STM OUTFITTERS
I guess I've been fishing with Steve Martinez of STM Outfitters and Indigo Guide Service for five years and in that time I've caught my largest smallmouth, carp, and steelhead with him.  He has a lot of time at the vise thinking of new patterns and most recently had his Frankenstein Sculpin picked up by Orvis.  Check out the T.F.M. post step by step HERE. 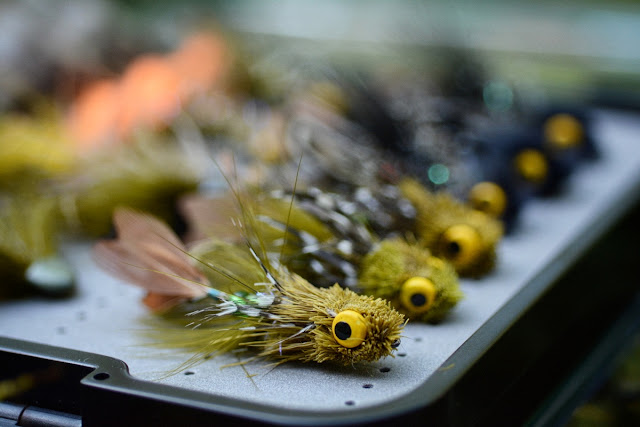 One of his more recent flies that he's perfecting for Lake Michigan carp and smallmouth is a jointed goby/sculpin pattern that has a great profile and swims great.  He tied me up a few to try on the smallmouth of the South.

This leads me pass along that give a hard look at the fly boxes of the guides that you fish with.  They likely have patterns that are just fishy as hell that work day in and day out.  Just because they aren't in a catalog (yet) doesn't mean they shouldn't be.  Some guides like to keep their secrets to themselves and aren't interested in fly sales royalties but they don't mind taking a few orders now and then for good clients.

PANTHER BRANCH BUGS - MINNIE MOUSE MICE
There have been a few step by step tutorials posted on T.F.M. with the Panther Branch Hopper, the Bloody Fanged Bat, and most recently the Minnie Mouse.  I ordered up a dozen of these micro mice to play with on the pond and river.  I haven't gotten them wet yet but have a couple spots in mind where they should work. 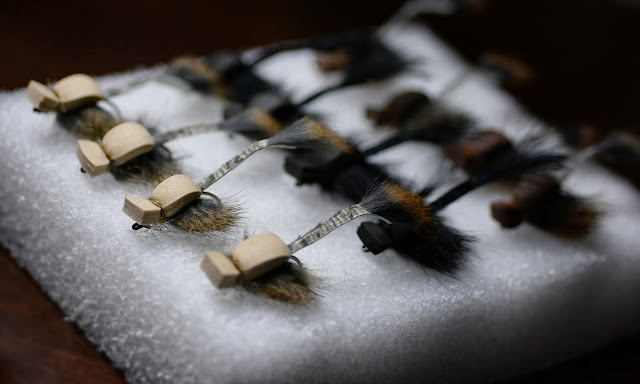 FRANKENFLY - SPLIT TAIL BASS SNACKS
Paul Beel of FrankenFly had a really good idea a few years ago to create a website highlighting artisan tiers, tying materials, and along the way has started selling his patterns through his website as well having his Bearded Wonder pattern picked up by Orvis as well. 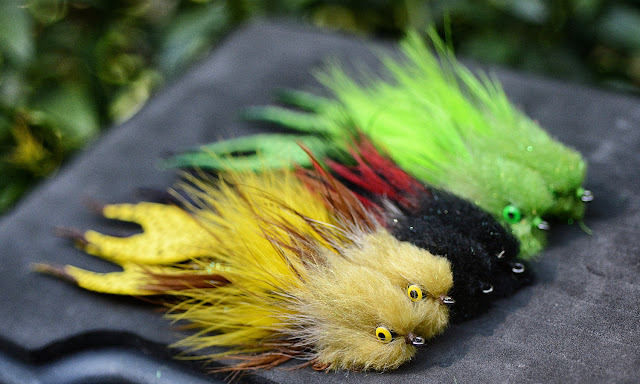 I first saw this split tail streamer in the latest issue of North 40 Fly Shop e-magazine and bought a six pack from Paul to play with on the pond.  They just arrived late last week and should be getting wet soon.  Like maybe tonight.

TIM'S WARM WATER FLIES
You might not have seen or heard much from Tim Blair for the past couple of years but he's working his way back form a house fire and ties daily for S.S. Flies.  I spoke with1 Tim over the weekend and he's getting ready to get back to his Tim's Warm Water Flies side project.  He's got some great designs and this damsel pattern just might break the code on our nighttime grass carp feeding on the family pond.  I'm certainly hoping so. 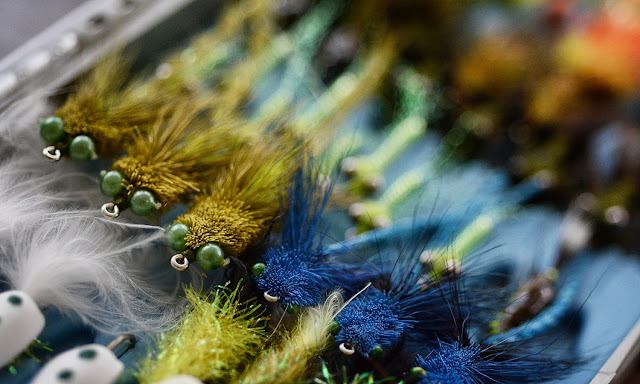 That's eight favorite artisan fly tiers that I put together in this post.  As you can tell, many artisan fly tyers work low drag with just a simple website or just through social media.  There are many others out there as well doing amazing work and I'm sure that a future post(s) on T.F.M. will highlight others that I really like their work of as well.

Who are some of your favorite fly tiers that you have confidence in the patterns that they tie?  Let me know as there is always room in my fly boxes for just one more excellent pattern.