I am just a few days back from a ten day bender in northern Michigan and of course I'm still catching up with unpacking, home chores and work.  This yearly trip kicks off my summer with a week on Beaver Island and then always trying to finagle some typically nighttime trout sessions on either end of the trip.

As the dates for the trip were firming up, I messaged Alex Cerveniak of Deer Trout to see if we could get out on the water together on the first night up in Michigan since the timing is usually good for brown drakes and even hex if the conditions are right.  Alex penciled me in and I was looking forward following up on our trip from a few years ago with a nighttime float worth remembering. 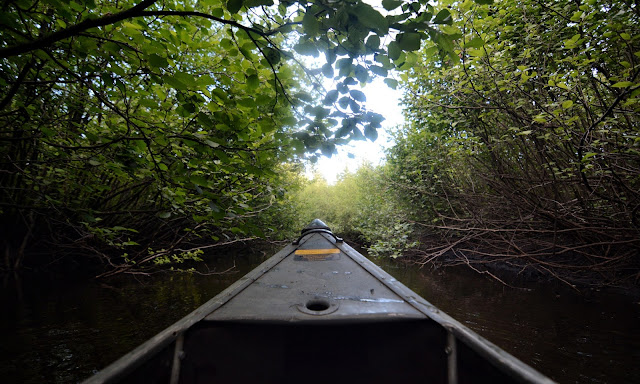 The overnight process of getting up to Michigan from South Carolina is a mix of too many highway miles, a nap or two curled up in the driver's seat of the 4Runner in a dark corner of a rest area, coffee and more coffee and finally arriving midday at my parent's house outside of Lansing with our two children beyond stoked to be back in "The Mitten" again.  My mom always has a couple rhubarb pies fresh from the oven on the counter and a oversized slice helps fix the road weariness before I continue north a couple of more hours.  Before leaving, I put a few extra pieces of pie on doubled up paper plates and into the cooler.  You just never know when you're going to need that next piece of homemade rhubarb pie to keep on going.

It was late afternoon when I met Alex at a gas station just off the highway north of Grayling and I followed him down back roads which turned into a maze of dirt roads which turned into a tucked away put in that I couldn't find again on my own.  Though the day was warm, it was supposed to cool down into the mid-40's that night and Alex was figuring that we had slim chances for big bugs.  Instead, we decided to slip his Radisson canoe into a creek that he knew held some larger than average brook trout.  Alex hadn't floated this section before but had fished the lower end of the section we'd be on.  He was told it was less than a two hour float from what seemed like a good source, though we are kinda of second guessing that information now along with the tip that the upper section was pretty tight with overgrown alders but that the creek would open up into lightly touched sections where casting wouldn't be a problem.

It was about 7:30 p.m. by the time we spotted one vehicle to the other end of the float and were back at the put in.  We still had almost three hours of good light left and I hurriedly put on waders, applied and re-applied bug dope and stuffed the gear bag with what I figured that I'd want along for the float.  I put together the Thomas & Thomas Lotic five weight and stowed it in the front of the canoe along with my gear bag and Alex situated the rest of the canoe with the cooler and his small gear bag with flies and whatever else we'd need.

Canoes always seem a little tippy but we were both situated in and pushing down the alder choked creek with seeming ease.  Thinking back on the start of the evening, I might have gotten too much confidence there that would be my undoing later.  On a scale of 1 to 10, I'd call the alder overgrowth a solid seven or eight.  We didn't have to chop our way through any of it but my paddle was quickly stowed as I focused on guiding the front of the canoe through while Alex used his wooden pole to push from the back.

An hour into the float and the creek really hadn't opened up beyond a small room sized spot here and there or at a corner.  We were still in alder overgrowth hell but having a good time catching up.  Alex and I have known each other for going on ten years and it's pretty interesting to recount the twists and turns of life.  As Alex was pushing forward through a the dense alders, I felt a sharp poke in my right shoulder and looked down to see a branch pushing in just below my collarbone.  I quickly turned my body to get the branch out of the way and in an instant the canoe had turned over dumping Alex and I, along with all of our gear, into the creek.  Damn.

Fortunately the creek was only a couple of feet deep in this spot and Alex and I quickly stood up to access the damage.  Ribs of the Radisson canoe had pulled free, gear was everywhere and the cold water made it all the way to my toes in each leg of my waders which was quite a wake up.  The zipper of my waterproof gear bag was open and when I picked it up out of the creek inside was a swimming pool with my Nikon, several lenses and a drone controller floating around in the slosh.  Fortunately the drone was more or less safe in it's clam shell case with very little water inside.  Somehow two sections of the fiberglass fly rod came apart during the dumping but was found and seemingly unscathed.  Whew, that was lucky.

We moved the canoe over to the edge of the creek to reorganize.  I dumped out the gear bag in the grass and tried to dry everything off the best I could though everything took a good soaking.  I've learned the tough (and often times expensive) lesson of waterproof is only waterproof on the inside when it's zipped tight but here I was again with all my gear bag soaked.

The canoe was repacked and we continued down the creek and two hours turned to three and then to four in these alder alleyways.  It wasn't until almost dark that the thicket gave way to the creek opening up.  Our mobile phones had about zero service which meant that the blue dot was slowly moving on a grid of emptiness.  We had no real idea how much longer the float would be until Alex started recognizing a spot here and there from trips past in the lower section.  We were never lost but the hush info of a less than two hour float was a total joke.

The moon came up full and bright and we still needed headlamps on as we ended up walking the canoe downstream for the last hour or so.  It warmed us up to be walking and it was after 12:30 a.m. when we pulled the canoe from the creek.  Somewhat exhausted we walked the canoe up to the road where we hoisted it atop of Alex's Subaru to lash it down.  We made it back to my 4Runner where I was able to change out wet clothes for dry ones.

I'd still do that stretch of water again with Alex but would suggest starting in early afternoon instead of evening.  There is a lot of potential in that creek to give up a few large brook trout and of course, spending time with Alex is always worth it.  We had just enough time on this float to maybe cast a dozen times and pricked a few small brook trout that couldn't resist a fly.

Alex and I said our goodbyes and he was  headed to home while I needed to get over to Traverse City.  The trip out from the creek put everything in reverse.  Tree lined dirt roads gave way to back roads and before long we were back in town.  I pulled into a store around 2:00 a.m. looking for a large bag of rice and zip tight bags in hopes of deep drying everything out from camera to lenses to controller.

The final gear loss toll of the night was a drone controller and 35mm lens that are both toast and a DSLR that still takes photos but the LCD screen won't display.  Taking photos now is much like the days of film as I can't see what I've taken until I download them.  Frustrating and I'll likely be investing in a new camera (and lens) soon.  The drone controller already arrived and the drone flies just fine.  No all was lost.  Tough lessons learned all over again and all could have been saved if I would have just zipped that damn bag shut.

Thanks again to Alex for taking an evening for the float and the memories.  Check his June Recap which mentions our trip and his thoughts on it.  We'll do it again I'm sure.