Close
Home / News On The Fly / Andy Z. And The New Native Ultimate

This morning I took a few minutes to run down to River Runners to meet up with Andy Zimmerman of Legacy Paddlesports.  Andy and I have been trading emails and phone calls for the past couple months and it was really neat to meet him in person to discuss a few things going on with Fishy Kid and T.F.M. 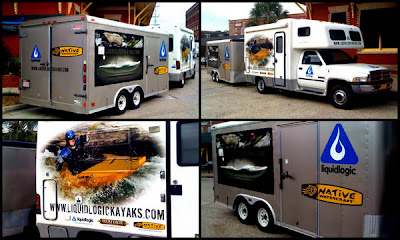 It was cool to see how Andy rolls when he's on the road to meet dealers.  His setup was complete with a camper and trailer full of kayaks of all sorts.

Moments after shaking hands, Andy walked me over to the trailer, which he opened to reveal stacks of kayaks in black fabric covers.  Andy reached in and pulled out the new for 2011 Native Ultimate 14.5 and walked me through the tweaks and improvements for 2011. 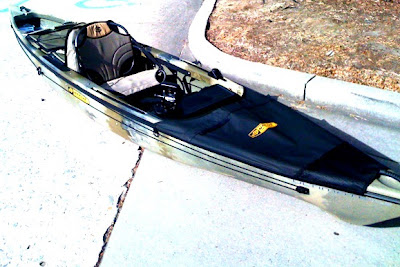 The first thing that I noticed was the new camo color scheme which looks really excellent.  I usually don't get to excited about camo but this is very well done and due to the process each boat will look just a little different than the next camo Ultimate that comes off the line.

Current Ultimate owners will immediately notice the new carry handles, foam elbow and foot area pads for comfort and stability, the groove track for easy on/off of accessories, and the First Class Seat can now fold forward to be used as a seat riser to sit up higher in the kayak.   All great improvements and there are also a few new accessories for 2011 as well such as two different dashboard options.

For those who have been sitting on the dock waiting to buy a Native Ultimate...2011 just might be your year.  Prepare to break your piggy bank.