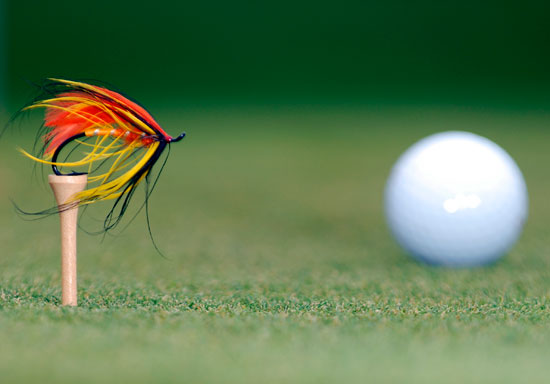 For those of you who may have missed it, Chris Santella recently wrote this interesting piece for The New York Times, in which he highlighted how fly fishing is a hobby of many of the world’s top golfers.  Santella has been on this golf-fly fishing synergy angle for some time now; he’s the author of the “Fifty Places” series of books that include both fly fishing and golf.

And, let’s face it, golf and fly fishing share a similar core demographic because they’re both leisure hobbies/sports for the type of person who wants to think as they play.  Both are sometimes frustrating.  Both reward planning.  Neither the golf swing nor the fly cast is about power and strength, rather timing and tempo.  In the end, both sports are about problem solving.  To the golfer, that challenge is how to put a little white ball into a small cup that’s 400 yards away, with as few strokes as possible.  For the angler, the challenge is how to put a fake fly into the mouth of a fish.  The fly angler can relax in knowing that nobody is keeping score; while the golfer can take solace in knowing the cup isn’t alive and moving.

Here’s the point—and the opportunity—for fly shops.  Given the synergies between the two sports, make a point to go to a local country club and/or municipal golf course, and offer to do a clinic on the synergies between golf and fly fishing… maybe a little casting clinic.  You never know where this will lead.  I recently did a similar small event (a couple hours, a couple months ago), and as a result, I prompted two duffers into taking up fly fishing lessons.

I would be very interested to hear any golf-fly fishing crossover stories, successes and failures, from AT readers, as we are exploring a deeper print feature on this topic.