I know that we all likely have preferences for everyday carry and over the years I've transitioned from a full size folding knife that I carry while on duty in police work to an assortment of folding knifes with and without pocket clips.  Some have had tools along with a blade but none have been totally what I've looked for in an EDC option.  I like having access to a few tools, like a screwdriver in both flat and Phillips, but I'm not likely to carry a full multi-tool in my pocket or on my belt most days.

I had been following along with the build up and then introduction of the FREE Series of tools from Leatherman which feature three key design improvements with tools locking into place with magnets, all implements accessible from the outside of the tool and tools are opened with a push of your thumb instead of a fingernail which can be somewhat awkward or even difficult to access. 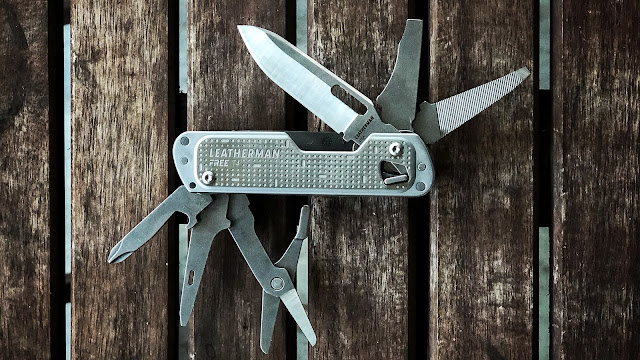 Over the past several months I've had the opportunity to demo the new Leatherman FREE T4 and I have been really impressed.  This is the perfect mash up of an EDC knife meets multi-tool and everything in the twelve tool FREE T4 has a use in a very cool and user-friendly designed package.

First impressions when unboxing the FREE T4 was that the tool was wider side to side than I expected it to be and the photographs online, whether intentional or not, give the tool a slimmer look than what it is.  Initially I was concerned as I worried that it would feel "big" in my pocket but after carrying the FREE T4 with the pocket clip for the past several months, it feels right and the width is needed to properly house the implements built into this multi-tool.

The overall impression from carrying the FREE T4 quite a bit is that this has quickly become my favorite EDC.  The knife and tools are easy to access, lock in securely with the magnetic catches and disengage with levers on each side with ease.  This tool has everything that I need and actually use in a multi-tool with no fluff.  The design and styling is aesthetically smart with smoothed out sides and edges that feel really good in hand.

The FREE T4 has a heft and overall feel that spells quality and with a price tag of $59.95, I consider it a deal too.

The only concern I've had with the FREE T4 is that a few weeks ago I slid out of the backseat of the Element and the pocket clip caught something on my way out.  Instead of the tool being pulled from my pocket, the pocket clip bent open losing it's retention.  I tried to bend it back in place which kinda worked and then continued messing around with it until the metal was weakened enough to snap.  This may have been covered under the Leatherman 25-Year Warranty but I ended up just ordering a replacement FREE Pocket Clip (which included the screw tool) to complete the fix myself.

I get to play with a lot of gear (both sent free for demo or purchased from my own pocket) and one of the telltale indications that I'm impressed is that I end up purchasing whatever it is for family or friends.  Over Christmas, I ended up gifting several FREE T4's to friends and those aren't likely the last ones that will get gifted either.  This is a heck of an EDC for the money.

Jump over to the Leatherman website to learn more about the FREE T4.  There is also a great article on "The Making of Leatherman FREE" series of tools with an interview with the product designers that's worth a read as well as a FREE Collection overview video which gives some more background.