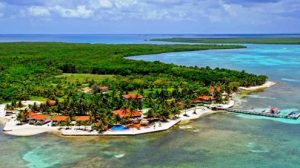 The citation from Green Globe read, in part, “For the past three decades, Turneffe Flats has actively supported the sustainable environmental, economic and social use of Turneffe Atoll through a variety of efforts. The eco-tourism resort has worked to be a model off-the-grid green enterprise and has developed many innovative ways to combine top-notch service with minimal environmental effects.”

Green Globe first certified Turneffe Flats for its sustainable operations in 2013 and again this year the eco-tourism resort has proven its environmental credentials with a notable compliance score of 89%, the highest in Belize.

According to Turneffe Flats’ owner-operator Craig Hayes, “We will do our part by working to sustain the incredible natural wonders of Turneffe Atoll with Turneffe Flats serving as a model for sustainable coastal marine tourism.”

The Turneffe Atoll Trust is involved with other conservation initiatives including sustainability-related research, an advocacy program for strict enforcement of environmental laws at Turneffe and the development of a land trust to perpetually protect key areas at Turneffe. Over the upcoming 3 to 4 years, plans to build a Turneffe Sustainability Center will be realized, assisting in overseeing and expanding local conservation efforts, added Hayes.