HAVE IT YOUR WAY - It's Not Just for Burgers

Before you get started on this great article from Bob Mallard, know that you can do your own deep dive down the rabbit hole to find your own perfect glass fly rods for what you need to do on the water too.
The Fiberglass Fly Rod Builders page is a resource that is constantly updated to reflect all the builders, blank makers, and fly rod companies that I am aware of who focus on fiberglass.  If I'm missing one that should be on the list, please send me an email.

Now, here is Bob's story about having it your way and thanks again to him for writing and sharing this article with the T.F.M. readership...

While I don’t do it often, if I do cave-in to hunger at the expense of my health, usually because I fished late and everything is closed, I slide into Burger King, sheepishly, where, as someone who doesn’t like onions, or multiple condiments on my burger, or whatever it is, I can have it my way, not the way someone else thinks I should have it…
After years of fishing mainstream off-the-shelf fly rods almost exclusively, and driven by my recent migration away from graphite in favor of glass, as well as the notably smaller offering in regard to the latter, custom products are now a valid consideration and option for me. 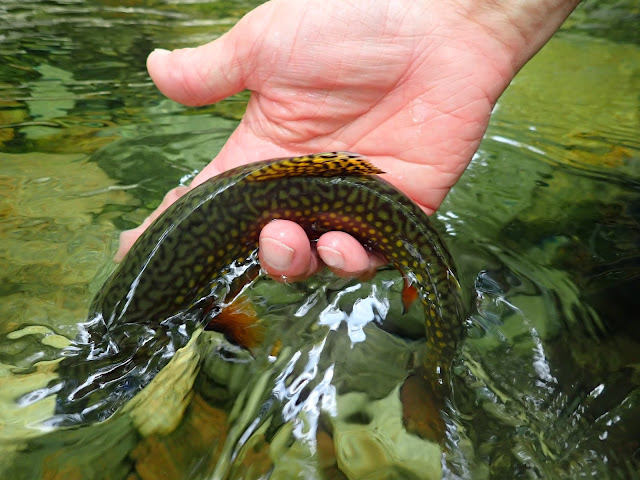 As a former fly shop owner, the custom rod thing runs counter to what I used to say to my customers.  But in fairness, this was due to some legitimate concerns regarding custom rods such as warranties, wait-time, and the fact that while the big rod makers rarely screw up, there are unfortunately some folks out there building rods who shouldn’t be.

As noted in an earlier article on The Fiberglass Manifesto, at 63-years-young, and three years younger than when I wrote it, I started fly fishing with glass rods, so my recent transition is as much about coming back to glass as it is going away from graphite. And to be clear, the glass rods of my youth were notably inferior to the glass rods available today.

While all of my graphite fly rods are off-the-shelf products, I’ve been taking a Burger King view of things lately when it comes to glass fly rods. With all due respect to the numerous outstanding fly rod companies out there, there is just something special about having a rod built to your own specifications.  And in some cases, it’s the only way to get what you want… 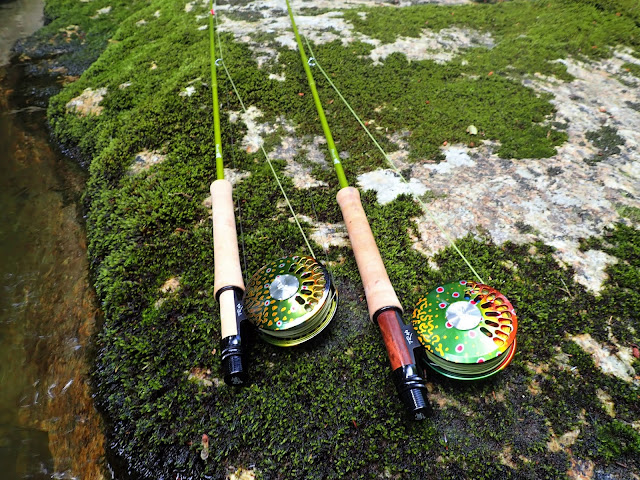 I edged my way into the custom glass game with two rods from Epic, with a 370-4 and 476-5 Packlight, which while not truly custom, allowed me to pick my blank color (Olive and Salsa, respectively) as well as my grip and reel seat, which in both cases were black uplocking with cork spacers. This is not the case with most mainstream fly rod companies today where you get what everyone else does. 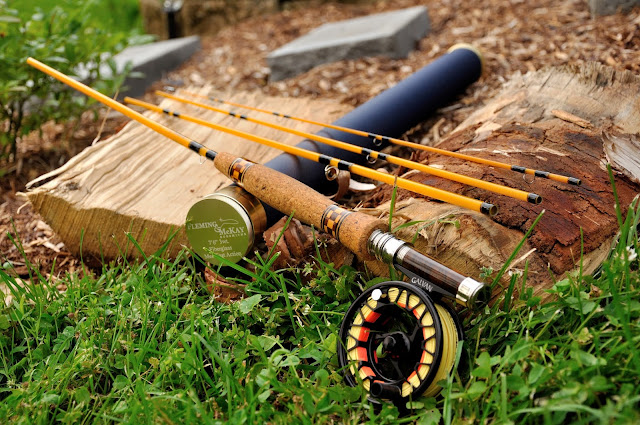 Next up was a CTS Quartz CrystalGlass blank built by Fleming McKay Rodsmiths.  Again, while available to order on their website, it featured a custom crushed cork in resin grip with intricate wood inserts, classic downlocking reel seat with wood spacer, and ornamental wrappings. A truly unique piece, it is by far the most custom looking fly rod I own. 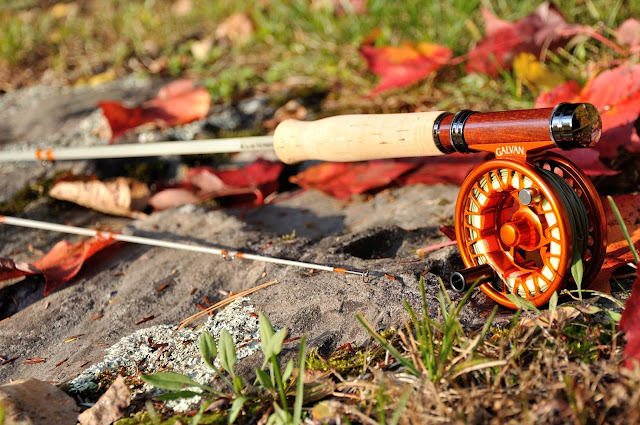 A year later, I turned to Marty Romeo of Deep Bend Rodworks, to address a niche no one else seemed able to. Marty built me and a friend custom 5-foot 2-weight rods on McFarland Rods blanks for use in tiny streams. Both ice-colored blanks, mine featured a small half wells grip, gunmetal cap and ring reel seat with wood spacer, gunmetal guides, and burnt orange wraps. The other had a small western grip, nickel reel seat with a blue dyed wood spacer, silver guides, a blue agate stripper, and matching blue wraps.

As part of an ongoing personal evolution that places a higher value on wild native fish and natural intact ecosystems, than it does big fish, nonnative and stocked fish, and artificial or highly altered habitats, I’ve moved from big rivers to small streams.  It’s the place where the sport is at its purest.  This in turn facilitated a move from graphite to glass.

As a result of changing weather patterns, and previously rare-to-the-northeast droughts, I am having to go further upstream to find fish than I did just five or so years ago, and in some cases, notably so.  This has forced some tackle changes, such as swapping my fanny pack for a day pack so I can carry more water, a snack, and my wading boots.

What used to be multi-hour truck-to-truck excursions within a relatively short walk of the road, turned into park-hike-and-fish outings that started with a 15- to 30-minute hike, followed by a short bushwack to the water. Soon I found myself hiking 30-minutes, and even an hour or more. But the strategy paid off, and I am finding fish regularly after busting on some of my old haunts. 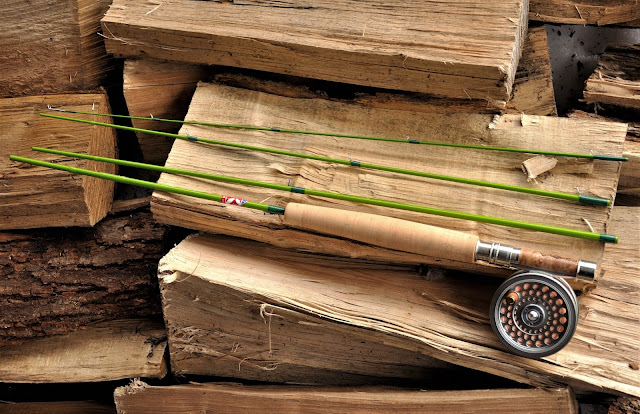 While I have a 6.5-foot 3-weight 4-piece graphite/glass hybrid rod from JP Ross Fly Rods & Company given to me by my fellow native fish advocates at Trout Power, and the aforementioned 7-foot 3-weight 4-piece and 7.5-foot 4-weight 5-piece rods, I wanted something shorter and lighter for use in the upper reaches of the small headwater streams I was now fishing.

One of my small stream workhorses is a 6-foot 2-weight Scott Fly Rod Company F2 glass rod.  The first modern premium glass fly rod I ever bought, it is unfortunately a 3-piece, and does not fit well in my daypack.  I wanted a 6-foot, 2-weight, 4-piece rod that would fit into the side of my day pack to give me another option.

COVID-driven product shortages in what was already a very lean market, anything shorter than 7-feet is considered a niche product and ignored by many rod makers, forced me to go the custom route again, and I’m glad it did.

When I first decided to pull the trigger, two friends, both fellow Native Fish Coalition board members, said they were also interested in getting a short, light, multi-piece glass rod for situations similar to what I was trying to address.

The situation led me back to Marty Romeo at Deep Bend Rodworks, who I have kept in touch with since he built my earlier rod. Marty had recently donated a custom rod to NFC for fund-raising, which after several months of moving through the USPS quagmire, arrived at my house as nothing but an empty cardboard tube that showed evidence of having been tampered with.

In addition to the general configuration, an insistence that the blank be ice-colored, and the fact that I was already in possession of a relatively fast, by glass standards, 6-foot 2-weight S-glass rod, I wanted a slow E-glass model. Thus, began what turned out to be a month’s long search, with a couple of false starts, to find the type of blank we were looking for.

Our search ended at Blue Heron Custom Rods out of Japan. The extremely light, very slow, internal ferrule blank turned out to be exactly what we were looking for. Next up were the accoutrements, something we all wanted to personalize, and address to our own specifications. In all cases, we each choose something different. 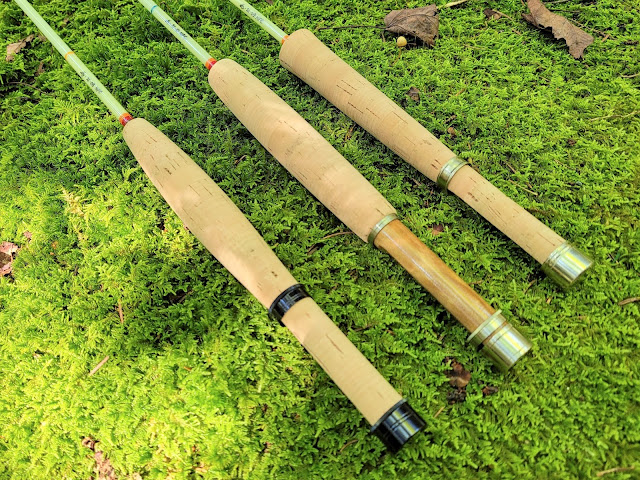 I wanted a compact modern-looking straight-line half wells grip, partly for aesthetic reasons and partly due to a chronically arthritic hand from years of gripping a fly rod, while one friend wanted a small western grip, and the other a compact cigar grip.  Two of us wanted cork spacers, and one wanted wood.  We all wanted classic cap-and-ring reel seats, mine and one other in nickel, and the other in black.

Guides were chosen to match the reel seats: Silver on silver and black on black.  Next up were wrappings... I wanted blue/green, one friend wanted blue, and the other wanted orange. And Marty surprised us with 3-tone decorative wraps in our primary NFC colors just above the wrapping check. 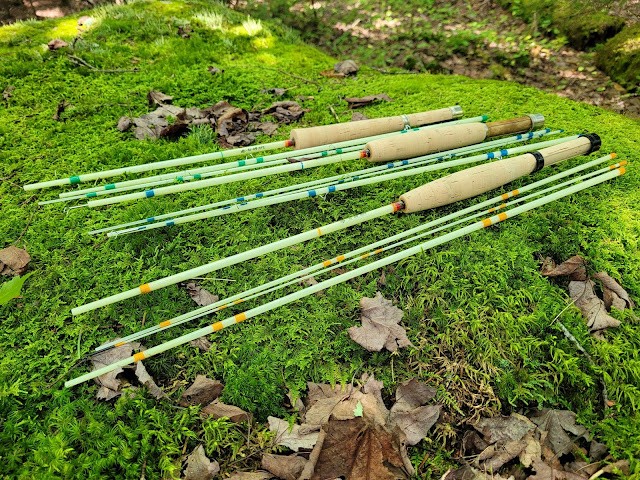 We needed new reels to go with our rods. And each of us wanted something colored to match the rod. I wanted silver to match the seat and guides, and the others wanted colors that matched the wrappings. Considering the light physical weight of the rods, and a desire to keep them that way, as well as something that would balance them properly, we chose Galvan Fly Reels Brookie B 2-3 reels. 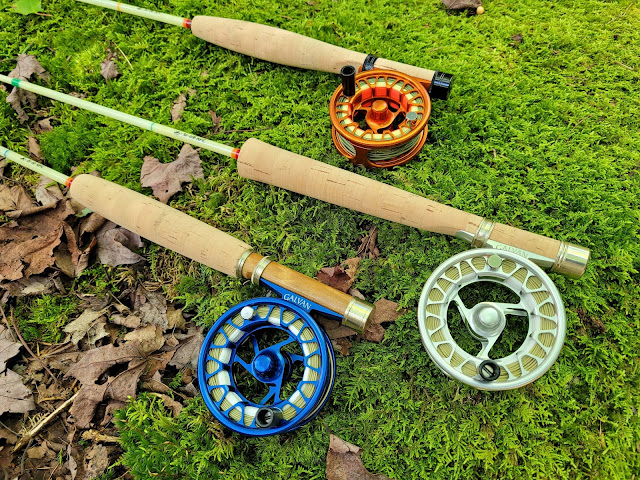 While the wait was killing us, and the all-too-short New England small stream season was slipping away, the rods arrived in time to get them on the water.  I took mine to the White Mountains region of New Hampshire, where I field-tested it on the all-too-rare small roadside stream that still has a robust wild native brook trout population. After getting used to the very slow action, the rod cast flawlessly and effortlessly.

A few days later, I stuffed the rod, housed in a custom reel-on rod case from Mountain Cork, into the side of my daypack, and hiked one hour into the headwaters of one of my favorite wild native brook trout streams. When we got to the water, we stashed a couple of tall IPA’s in the cold mountain stream, and hiked another half hour before pushing through the woods and back into the stream. 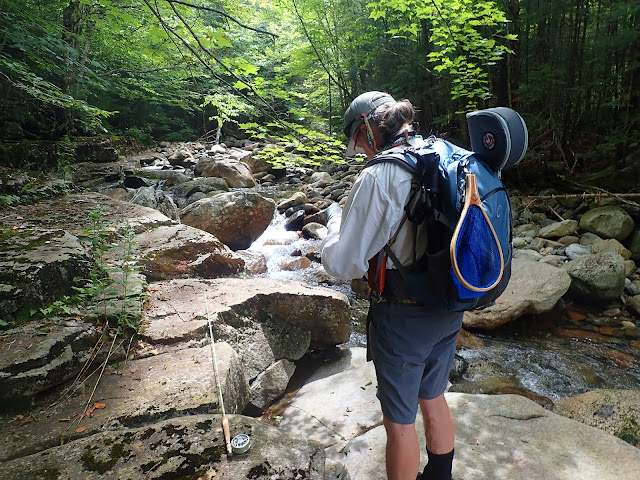 We swapped our hiking boots for wading boots, ate a quick snack, pulled out our gear lanyards, put on sun gloves to protect our hands from the ever-present mosquitoes, rigged up, lit cigars, and began what would be over three hours of epic small stream fishing for wild native brook trout, with several fish nearing 10 inches landed, and many smaller ones to hand.

When we reached the take-out, we collected our cold beers, and sat down to eat a sandwich. When we were done, we fished around the general area a bit, trying, and unsuccessfully, to coax an oddly large fish we had spotted to take a fly. After giving up, we changed back into our hiking boots and pushed back down the trail to the truck. 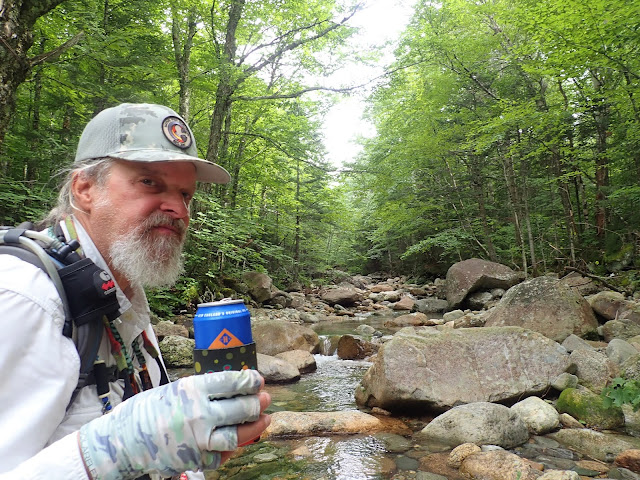 My new have-it-your-way fly rod proved to be exactly what I was looking for. It excelled on short, precise casts in tight quarters, reached out when I needed to, didn’t overpower the small fish, and was short enough to keep out of the low-hanging branches. We addressed something the industry has not fully embraced - short light-line fly rods for small Eastern freestone streams where the wild native brookies rarely reach eight-inches…

BOB MALLARD is the Executive Director for Native Fish Coalition.  Look for his books, 50 Best Places Fly Fishing the Northeast Squaretail: The Definitive Guide to Brook Trout and Where to Find Them Favorite Flies for Maine: 50 Essential Patterns from Local Experts