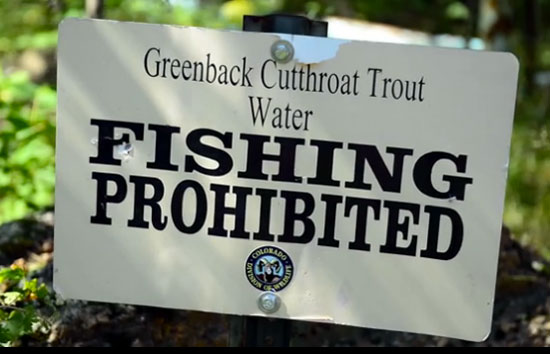 Some scientists now believe that a small steam near Colorado Springs, Colorado  (Bear Creek) holds the last true surviving population of one of the rarest cutthroat trout in the world— the greenback cutthroat trout.  Only an estimated 750 fish remain in the wild, and The Greenbacks (the conservation group/offshoot of Trout Unlimited) need your help to initiate a movement to both protect and proliferate these fish.

The greenback cutthroat trout has seen it’s fair share of problems over the last 100 years. Like all of Colorado’s native trout, the greenback was pushed to the brink of extinction through overfishing, development and pollution. The fish was actually thought to have gone extinct in the 1930’s.

Fast-forward 30 years, and scientists discovered what they thought were relic populations of greenbacks.  They began using these populations as the brood stock for populating fish around the Front Range and in 1978, the greenback was downlisted to “threatened” (after the goal of establishing 20 self-sustaining populations was met).

Through recent breakthroughs in genetics science, polymerase chain reaction (PCR) methods have been applied recently to further decode genetic lineages and to test samples that were gathered over a century ago.  By cross-comparing historic samples with contemporary samples, including fish from Bear Creek, it was discovered that there were six distinct lineages of cutthroat trout in Colorado. Two of these species are extinct while four others remain in watersheds across Colorado.  One species resides in the Rio Grande river watershed, one occupies the Gunnison and Colorado River watersheds and one lives in the Yampa and White river watersheds.

Testing on the fourth species revealed the most shocking news: only one wild population remained of the greenback cutthroat trout.

*Editor’s note, there are still questions to be resolved about all of this, and we expect further studies to shed new light on the situation.  One thing is undeniable, and that is that the trout population in Bear Creek is extremely rare and highly significant.  I might be the keystone for bringing Colorado’s state fish back from the verge of extinction.

To help achieve their mission of protecting and preserving native fish and their habitat the Greenbacks have launched a unique campaign to generate funding for future phases of work in Bear Creek.   Running through January of 2014 they are coordinating an Indiegogo Project (a crowdfunding platform) with an ambitious goal of raising $10,000 dollars to help fund conservation related projects, and community outreach and education. You can learn more at www.1of750.com.