The American Fly Fishing Trade Association has announced Keepemwet Fishing as a recipient of a Fisheries Fund grant, to support their work on education about catch-and-release and proper fish handling techniques.

Read more in the press release below.

BOZEMAN, Mont. – Earlier this month AFFTA awarded Keepemwet Fishing with a Fisheries Fund grant in the amount of $2,500 for their continuing work in educating anglers on the proper way to handle and release fish.

“We’re seeing a tremendous shift in angler appreciation of and care for the fish they catch and how they handle them,” says AFFTA president, Ben Bulis. “Social media has definitely forced us to take a closer look at what we might’ve considered ‘normal’ in the past. A new catch-and release ethos is being adopted, and we’re proud to support Keepemwet Fishing and the significant role they’re playing in fostering that change. 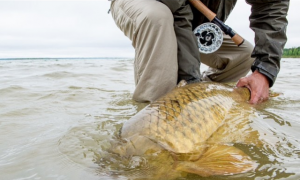 “Keepemwet Fishing is about releasing fish in the best condition possible,” says Sascha Clark Danylchuk, head of Operations at Keepemwet Fishing. “We believe that recreational anglers are a key component of fish conservation, and that science-based approaches can help create healthier fisheries. Our education campaign provides anglers with easy to use principles and tips that help create the best outcomes for fish that are caught-and-released.

“The grants we have received from the AFFTA Fisheries Fund have allowed us to reach a greater audience through our education campaign on the best handling practices for catch-and-release. We couldn’t have done it without the help of AFFTA,” she adds.

“We are so thrilled with the momentum that continues to build behind this education and communication effort,” adds Bryan Huskey, Founder. “From the individual anglers we hear from around the globe, to companies, businesses and organizations far and wide, we appreciate each and every form of support. Tremendous thanks to AFFTA and the Fisheries Fund for this grant. We look forward to the continued success of this effort far into the future.”

The AFFTA Fisheries Fund was established in late 2014 with the main objective of funding organizations and projects focused on fisheries conservation and education. The Fisheries Fund is initially seeded with revenue from IFTD, and is now open to donations from AFFTA members and the general public. To learn more or make a contribution, go to affta.org/fisheries-fund

AFFTA advocates for and promotes the sustained growth of the fly fishing industry. By igniting consumer demand for products and services, providing businesses the tools to be successful, and advocating for access, protection and restoration of fishing waters, we will continue to enhance the passion and profitability of the sport of fly fishing.