NAGEL FLY RODS - "When Light is Not Light Enough"

The other week I was scrolling through Instagram (as I do way too often) and came across the latest fly reel creation from Patrick Nagel of Nagel Fly Rods.  He and I traded a few messages back and forth and since he was in the process of building out another batch of CFK fly reels, he agreed to take a few images and provide some background for the readership to enjoy. 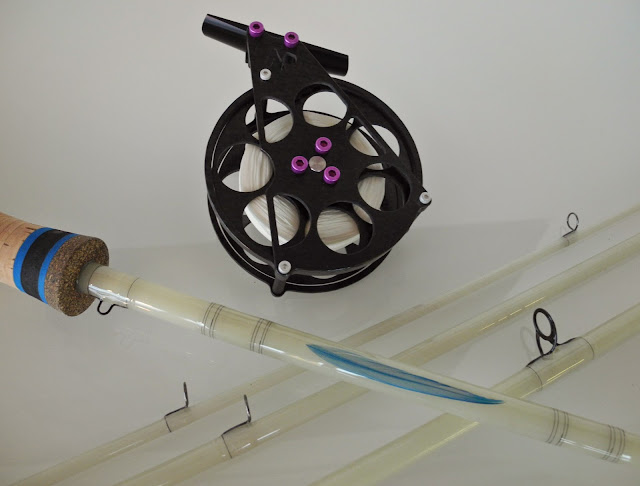 Patrick wrote...  "Nowadays there are hundreds of reels on the market, maybe even more.  One can spend fifty bucks to well over $2000.  There is the choice between a drag, or just click and pawl, sealed or open.  Some of them are light and fragile, some bullet-proof and heavy like a tank.  The list continues forever but in a nutshell, there is a reel for every kind of fly fishermen.  Really?

So what motivates people like me to custom-build not only fly rods but also fly reels?  People ask this question all the time and it’s actually a good one.  The answer however is pretty simple: Because one can’t buy the reels from stock like I build them.  There is no full CFK reel out there at the moment, and it's as simple as that.

Let me take you on a short journey through a fly reel design and it all starts with a vision, with an idea.  Pictures in your head and first rough sketches…" 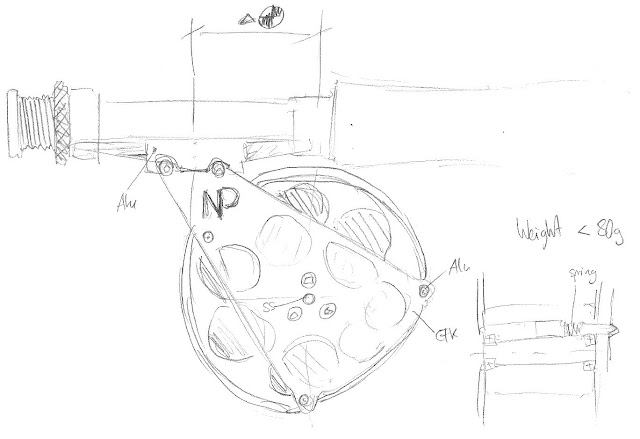 "In this particular case the reel was light.  Not only light, but ultra-light.  That means no drag, but just click and pawl.  And because it should be as light as possible the planned line weight was in the range below a five weight line.  More would be possible but never forget that a reel needs to balance a rod in the end and that a sub 100g reel on a eight weight fly rod feels quite wrong, believe me, even though it would be technically possible.

With these parameters the framework for the project were given:  A reel for up to a five weight line plus backing and as light as possible.  Target weight to be below 80 grams.

Now, how does one reduce weight?  With the CNC machines available today and 5-Axis milling there are fantastic opportunities around but even with these beautifully fragile milled reels the limit is reached at some point (Example, the Waterworks-Lamson states 80 grams for the Force 1).

So, what’s next?  The time-honored 6061 Aluminum needs to give way to a new material – CFK!

CFK often is seen as the silver bullet to solve all engineering problems.  Its weight/strength ratio is unreached but it sure has some downsides.  One is the price and another the machining.  Tools wear crazily fast and to keep tight tolerances is an art for itself with this material.  Therefore its absolutely uninteresting for big brands to produce complete reels out of this material.

But it saves roughly 35% of the weight compared to Aluminum and used in the correct way even adds strength to the design. Let’s do it!

My background as mechanical engineer for sure helps a lot and after multiple iterations I considered the design as perfect, mainly the mechanical strength and weight of the reel but also from an aesthetic point of view.  It turned out as a combination between aerospace materials and vintage design. 3D CAD helps a lot and is a great tool to optimize the design.  In addition to that FE-Simulations support to not just reduce the material to safe weight but to remove the material in the right spots to not weaken the system." 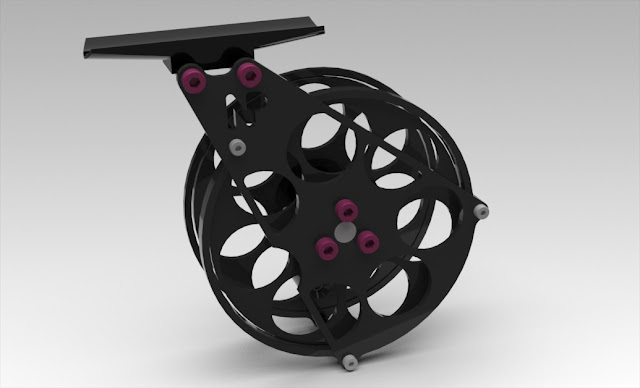 "During the optimization phase I integrated a smart trick into the design that doesn’t reduce the physical weight of the reel but makes it “feel” lighter.  By not attaching the reel straight below the reel foot but slightly moved forward, the lever arm where the weight of the reel acts, reduces (measured to the balance point of a rod/reel system).

This reduction is about 15% of the entire reel weight, which is quite significant.  In other words, the reel feels about 15% lighter than it actually is.  Not bad by just fine tuning the design!  The reel in the end turned out as a hybrid between CFK for the frame and the spool and anodized aluminum for the hollow shaft and the raised pillars plus the reel foot.  The main shaft of the reel is stainless steel.

All the screws of the reel are aluminum as well, which has two benefits.  First of all it saves weight and second it also prevents the reel from contact corrosion which usually happens between different kind of metals.  Such a reel of course deserves only the best available bearings – in this case stainless steel ABEC standard with non-contact rubber shields.  They will last a lifetime." 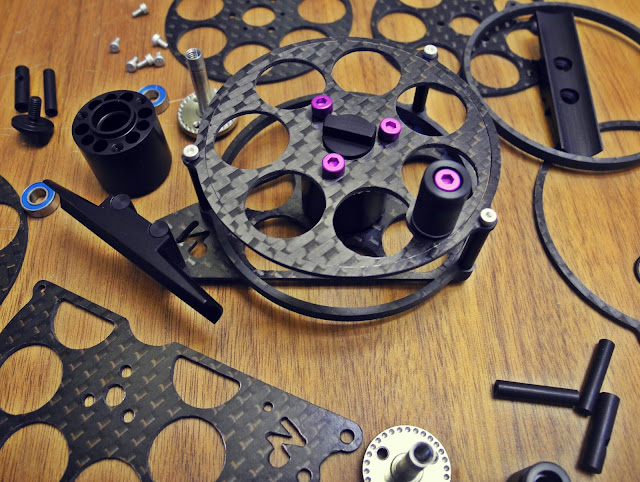 "Some pictures of the manufacturing..." 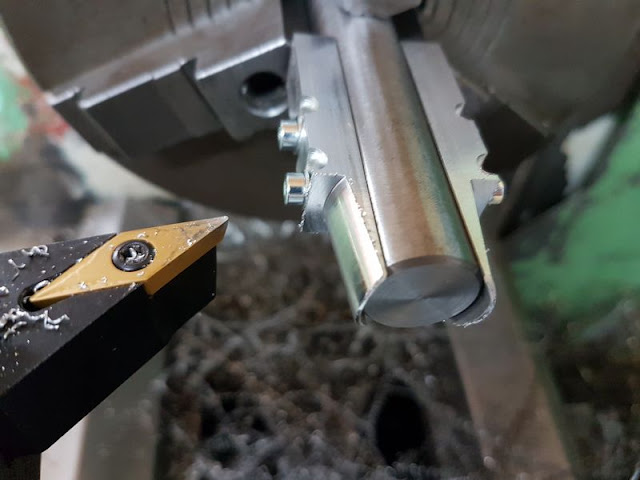 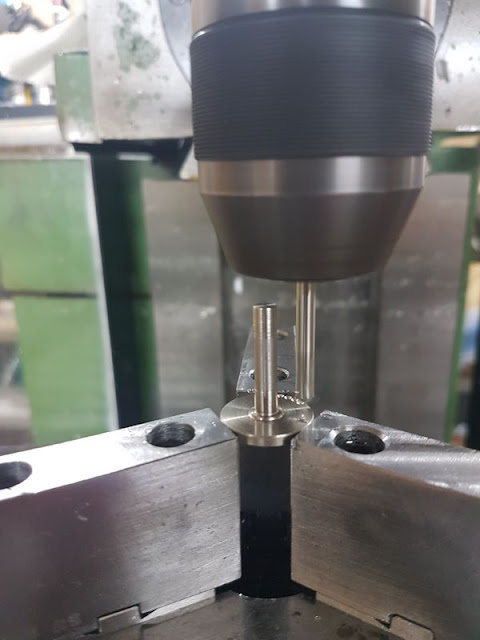 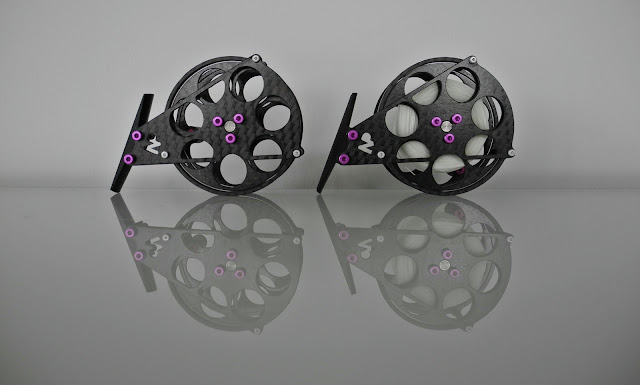 "Now to lift the weight secret.  The reel turned out at 62.5 grams.  I know most of the reels on the market and this one for sure is one of the lightest, if not lightest, ever built.  On top of that it feels like 15% lighter, which even ends at 53.5 grams.  I think that’s pretty impressive!" 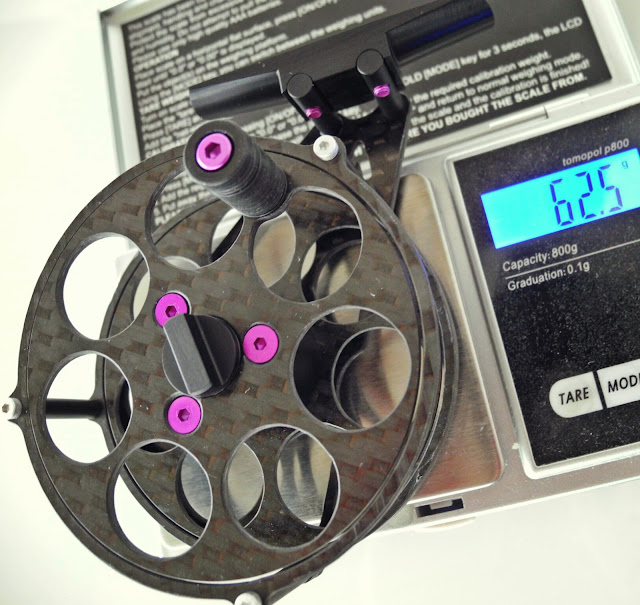 "In the first run I only produced two reels – as proof of concept.  Just minutes after pics were online on Facebook and Instagram, I received messages from people who wanted to buy one.  It seemed that I’ve done something right.  These are not only reels for me, it’s much more.  It’s a passion, a feeling and a very special satisfaction.  To share my joy one of these two reels will now catch trout in the chalk streams of England.  A very satisfying thought that people fish my reels.  As the stream of messages didn’t end I decided to make five more reels, which are currently in production.  They are a 100% designed, manufactured, anodized and assembled in Switzerland.  That assures a perfect quality control.

Lots of people tie flies, which I think is great!   Still many build rods, which I consider a great achievement.  Not so many however build their own reels like I do.  And believe me, there is hardly a better feeling than to catch and release a wild fish on a fly that you tied your own, a rod that you custom built and a reel that has been designed and manufactured by yourself.  That’s passion!" 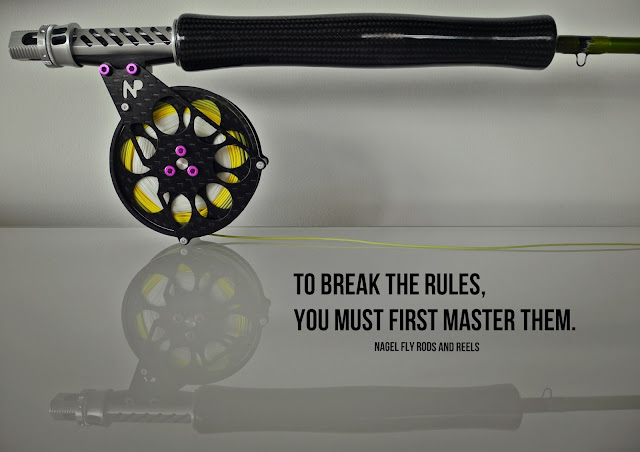 "If you are interested, please feel free to drop me a message by email or visit my Facebook or Instagram page for more Info’s and pictures.  It would be great to hear from you!"

Homemade innovation and CFK don't come cheap and one of these fly reels will set you back $500 Euro (or $588 USD) but it sounds like no other fly reel could be lighter on your reel seat.