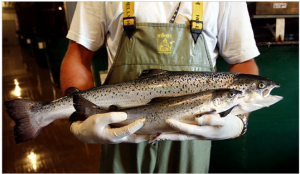 The farming of Atlantic or genetically engineered salmon poses a serious threat to our native Pacific salmon. The potential for escapement would put this invasive species in competition for food and space. They also could breed with wild stock, spreading undesirable genes and diluting the genetic makeup of our wild stock. Genetically engineered salmon can also grow much larger than native salmon, raising concerns that the super-sized fish would out compete wild salmon if they were released or escaped into open streams and waterways.

Farmed fish are also vectors for disease, which jeopardize the survival of our wild salmon stock, their habitat, the food sources and the economy they represent. What is particularly alarming is that genetically engineered salmon would be difficult and perhaps even impossible to eradicate (similar to invasive species) because genetically engineered organisms are modified to enable them to withstand wider ranges of disease, salinity and temperature.

Solution
Take a proactive approach to protect wild Pacific salmon and steelhead from the farming of genetically engineered and Atlantic salmon. Support Oregon House Bill 2530 which protects our native species by prohibiting the importation, cultivation, and release of genetically engineered or Atlantic salmon in Oregon’s waters. The bill is sponsored by Representative Paul Holvey and Representative Deborah Boone.

This bill is supported by a diverse group of partners including:

Comments will be accepted until March 21, 2013 so act now!
It will only take 2 minutes!

Please click here to read over the comments and support a proactive solution to the risks Atlantic and GE salmon farming pose to Oregon’s wild, native fish

Thank you for your support of wild fish!