Every morning on Beaver Island brings a lot of anticipation but the first morning always brings much more than the rest of the week.  The Dalwhinnie Bakery & Deli, which is just a short walk from The Fisherman's House where we were crashed for the week, is the meet up each morning.  The Indigo Guide Service Captains and angler pairings are figured out, weather is checked, winds are checked, breakfast hurriedly eaten, and minutes later everyone (with typically too much gear) is at the boats ready to take off on the water for the day. 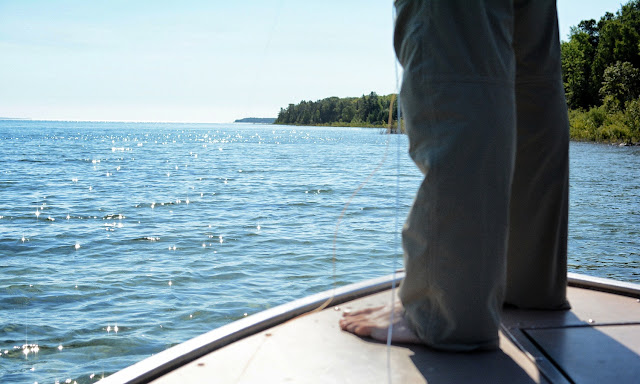 Typically pairings of who will fish with who are figured so that everyone gets an opportunity to fish with each other and work their way through the three Captains too.  Captain Kevin Morlock, Captain Steve Martinez, and Captain Steve Adduci all bring a different angle to fly fishing around Beaver Island and I always gain something important from each of them through the week.

Since most of the group really didn't care if they caught carp or smallmouth on the first day and Tim Daughton and I really wanted to concentrate on carp, we opted to fish with Captain Kevin Morlock.  I think I've mentioned it before, but he'll fish for smallmouth if he has too but if there is any chance to find carp, then we look for carp.  That's why he's on Beaver Island and that's where the focus should be.  I get it and Tim and I were on the program.

The boats all went in different directions and the first couple hours were spent in our boat looking for warm water and concentrations of carp.  It took a little bit but we found some warming flats which were bringing singles, doubles, and triples onto them.  No matter how many times I've been to Beaver Island, I am always amazed by the clarity and color of the water.  It just lights up in shades of blue, green, and tan depending on the depth and bottom structure. 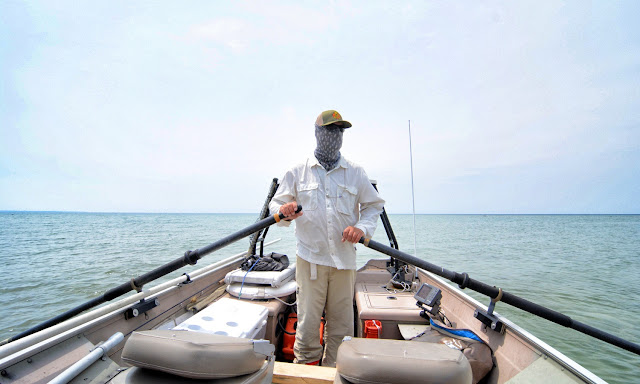 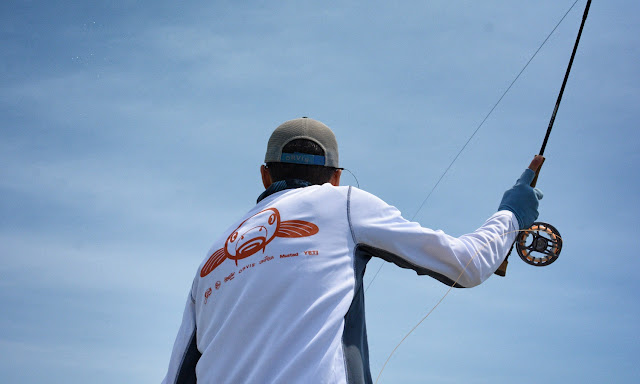 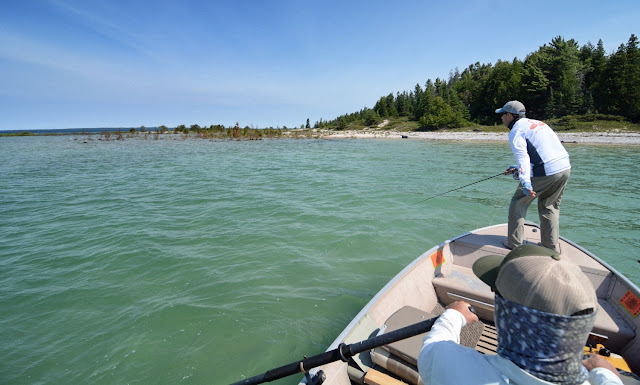 Tim and I traded spots on the bow through the morning and I had my first connection on a solid carp that I spied cruising up against the shoreline line coming left to right.  I led the carp by fifteen or twenty feet, like you're supposed too, with the fly landing a few feet past the line he was slow cruising.  As he approached, I moved the fly in front of his face.  The carp turned.  He was on it.  Bump.  Bump.  Captain Morlock whispered "STOP.  Let him eat it."  Sure enough, the carp moved forward and scarfed it up.  He took off on a run and a few more after that before being brought into the net. 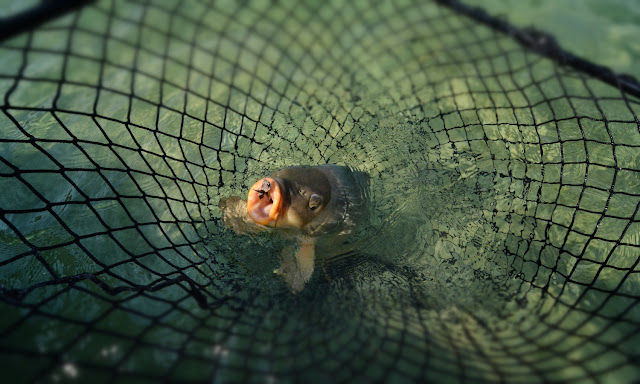 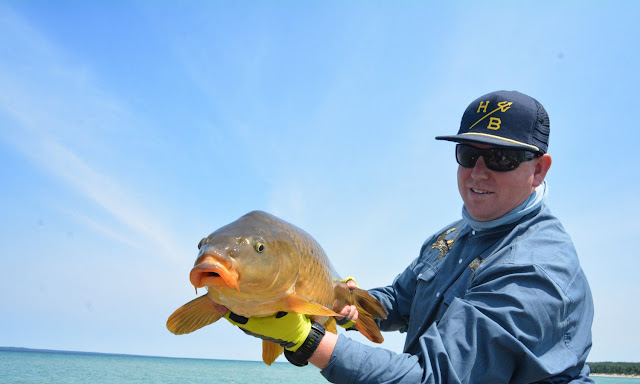 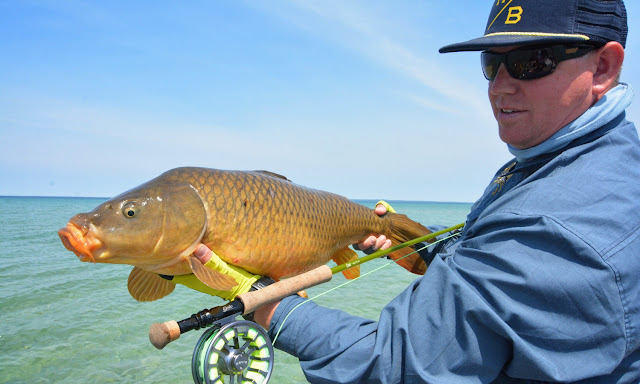 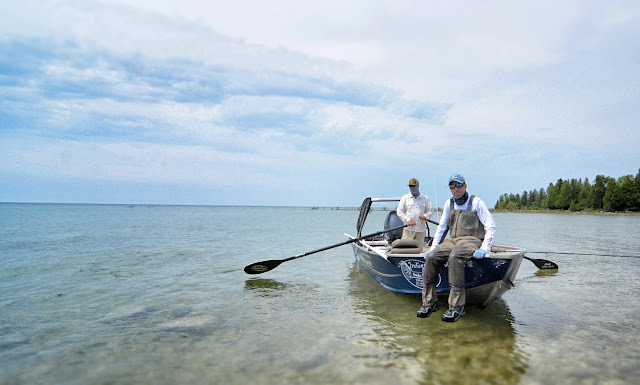 The next couple hours were more searching, more casting, more refusals, more hangups on the bottom right when you'd expect a carp to eat.  It's all part of the game.

We were working our way back to the house and as we were coming up on a flat, Captain Morlock asked if I wanted to go work the grass while he and Tim stayed on the boat.  I am never one to pass up a chance to get out of the boat and a short walk into the grass found a small sandy bowl near the edge of the woods with bath warm water that was full of cruising and laid up carp.

I ended up picking three carp off in short order and as I was releasing the last one, looked up to see Tim's Helios doubled over on a good carp.  I began walking through the grass to get a few photographs of Tim's carp and since there was a carp in the grass right in front me me, I put a fly in one more mouth walking him out to the open water to put them both in the net. 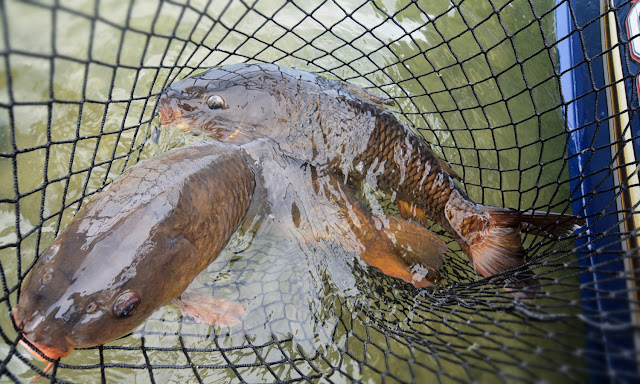 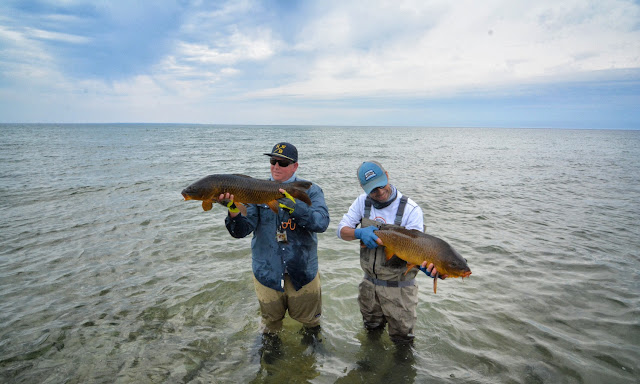 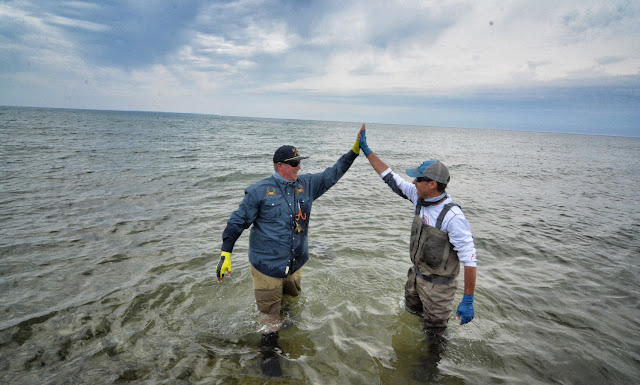 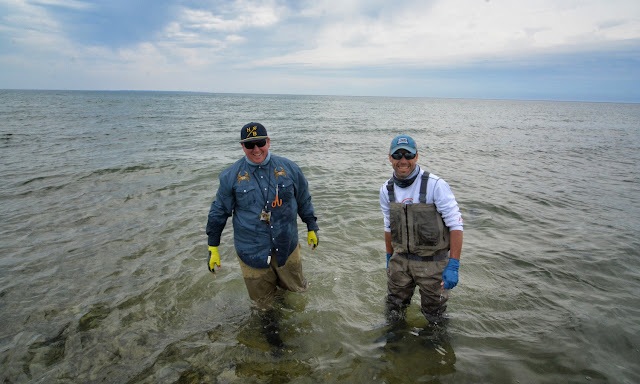 Back at the house everyone traded stories of great days on the water.  Captain Austin Adduci's boat with David Grossman and Alex Landeen put an unreal number of carp in the the net while Captain Steve Martinez, Danny Reed and Mike Rennie caught some great smallmouth and pike to start the trip.  It was smiles all around but Tim and I were thinking that there's nothing like a ninth inning double to end the day.