Truth told, a lot of content on T.F.M. starts from something that I have seen on social media, typically Instagram.  I've been following Matt Monahan of The Mighty Bluegill for sometime now on Instagram and I am always impressed with the style of Gyotaku and how it captures a fish or other aquatic creature.
I asked Matt if he'd mind sharing photographs of a few favorite pieces along his background in this artistic medium.  Enjoy. 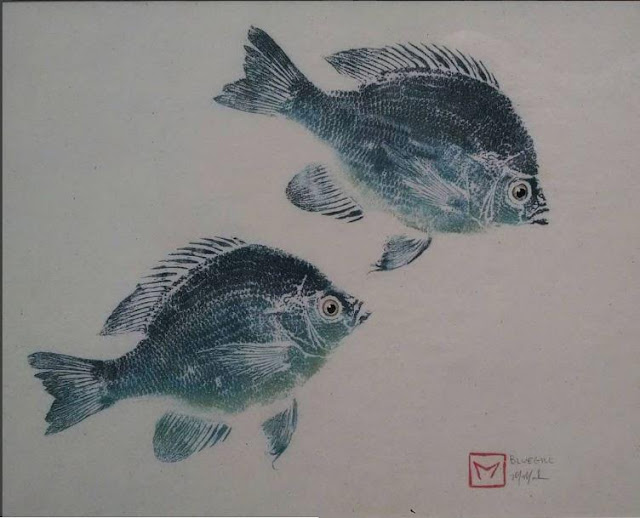 Matt wrote...  "Gyotaku was born on a Japanese fishing boat. In the mid 19th century there were no cameras and there was no refrigeration. Fish, therefore, would have to go straight to market upon arriving in the port. Those poor Japanese fishermen had no way to prove to their friends that they weren't lying about how big that last one was....
Until someone had the idea to record the size and details of their fish with the basics that they had: sumi ink and rice paper. The put the ink on the fish (gyo) and rubbed (taku) the paper on it, and voila! A print of the fish recording all its detals, including size.
This functional record keeping evolved into an art form and now it's practiced world wide by people who love fish, art, and Asian culture.
I taught Asian history for years, visited Japan and nearly moved there to teach. I've also fished my whole life and have a one week annual fishing class with my high school students. Our art teacher told me I ought to check out gyotaku. So, the next year, we attempted to print our fish with acrylic paint and paper. Looking back, the results were pretty poor, but we thought it was awesome and it became part of the class. Now, after printing our fish, we fillet them and later hold a fish fry and art exhibition where we eat the fish while we look at their portraits.
In addition to the class, I've taken to study the art form by joining the Nature Printing Society and even traveling to study one on one with master printers such as Heather Fortner.
Gyotaku is a method, not a medium. You can print on paper, fabric, plastic, I once even printed on a rock. I've printed using acrylic paint, water based block printing inks, oil based etching inks, sumi ink, and even India ink. Eric Hochburg, one of the NPS founders, once printed a squid in its own ink.
Most of the fish I catch are caught by myself or people I know. I often print fish for people on commission, like a taxidermist. It leads to some neat learning opportunities. I friend brought me a northern pike, for example, from North Dakota. I gutted it and found it was full of large crayfish. I took the best crayfish and printed it along with the pike, showing him about to be eaten. I titled that one, "The Last Supper."
Not all fish print well. Large scaled fish like bass, sheephead, and drum print really easily. Trout and grouper are harder because their scales are so fine. Some, like shark and mackerel, have no scales and you have to work to accentuate other features of the fish to make a good print.
The process is pretty simple. Take a dead fish (I'm still working on a catch and release method), and clean all the slime off. You can use anything from salt, soap, even lemon juice or vinegar. Then position the fish the way you'd like it to look, using clay, foam, pins, cardboard, and such. Carefully ink the fish in all the places you'd like to show up in your print, and then put paper or fabric on it and rub and press carefully and evenly to transfer the ink to the print. Once it dries, paint in an eye and sign it. Voila, a record of your fish and a work of art all in one. Leave it to the brilliant innovation of a pre-modern Japanese fisherman. We stand on the shoulders of giants." 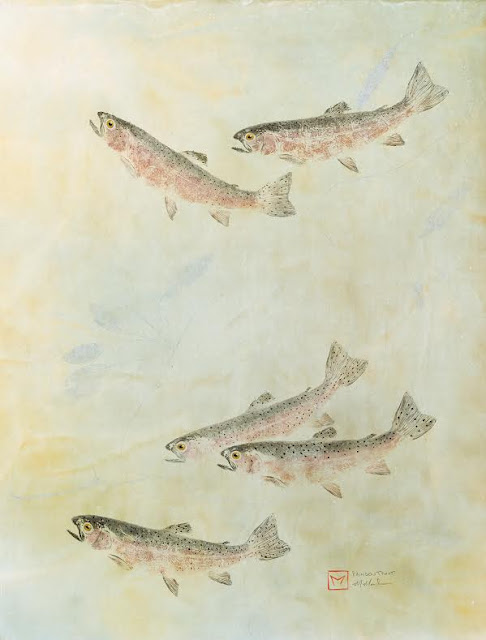 "This is a Tennessee rainbow caught by my wife's boss's son. It is actually three pieces of ma (hemp) rice paper wheat pasted together. The bottom is a piece I dyed by hand, the middle is a piece on which I printed some American Pondweed. The top is the actual fish print. I used oil based ink and finished the fish with water colors and India ink." 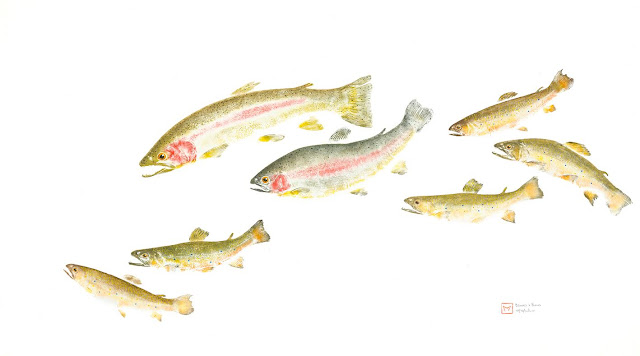 "Brooks and Bows is a neat print because my daughter caught the 22" rainbow in Tennessee, my son caught the 18" "bow in Georgia, and the brookies are from a friend in California. The fish are printed with oil based ink on ma paper." 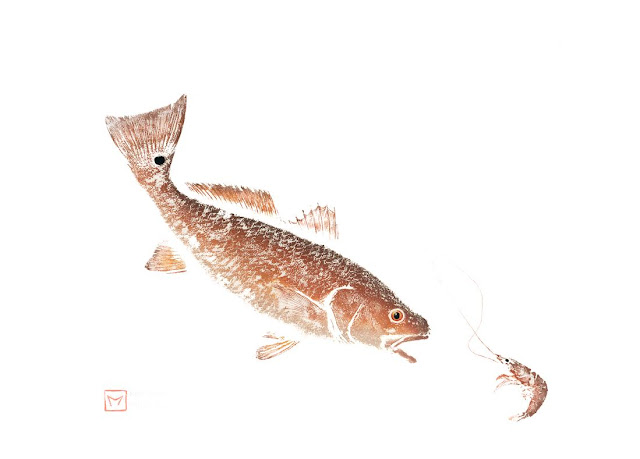 "A friend caught the redfish in Louisiana and brought it to me to print. I bought the shrimp at the local Asian Grocery store. Akua ink on cotton fabric." 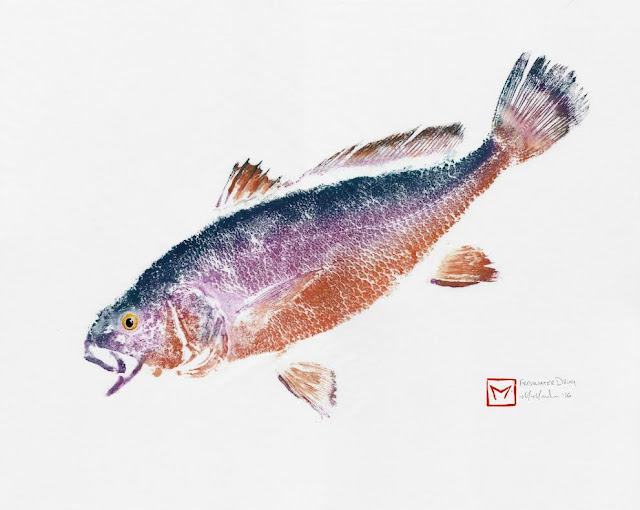 "The freshwater drum is printed with water based ink on cotton fabric. Around here, drum are considered a trash fish, so I wanted to try to rehabilitate his reputation with the most beautiful colors I could mix. Incidentally, I carry a T-shirt of this print and it's the best selling shirt with my female customers." "The brook trout are printed with oil based inks on hand-dyed ma." 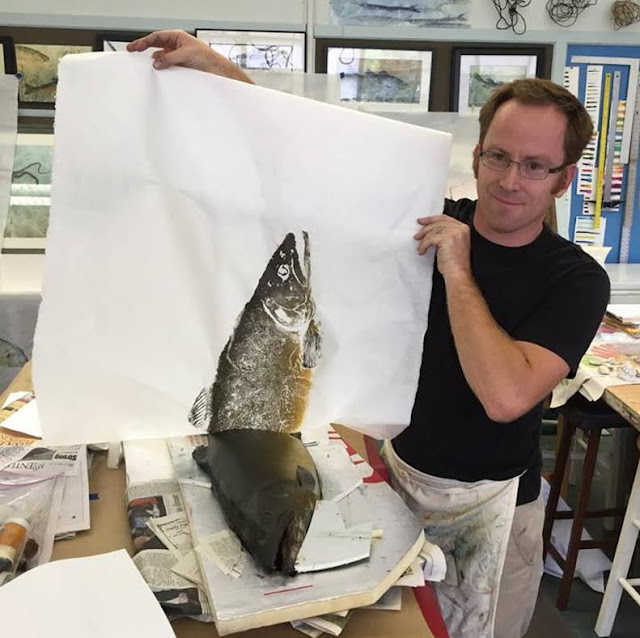 "The huge brown trout was actually part of both a tragedy and a conspiracy. It was killed in the line of duty by fishery guys in another part of the country. It became known as "troutgate" because there was outcry all the way to the government level and the perpetrators were commanded to return the fish, which they never did. I cannot tell you how I was able to print this fish as it would risk the identity of my connection." 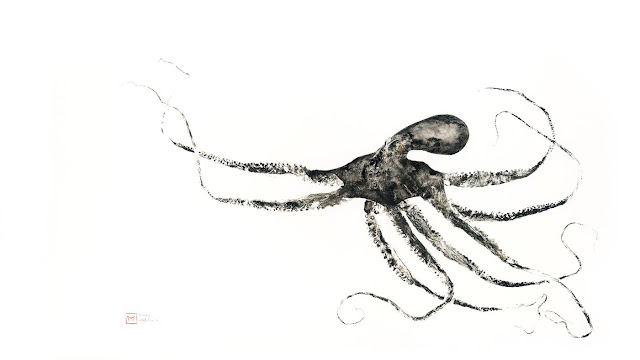 "All my fish have cool stories behind them. The octopus I special ordered at Publix for about $45." 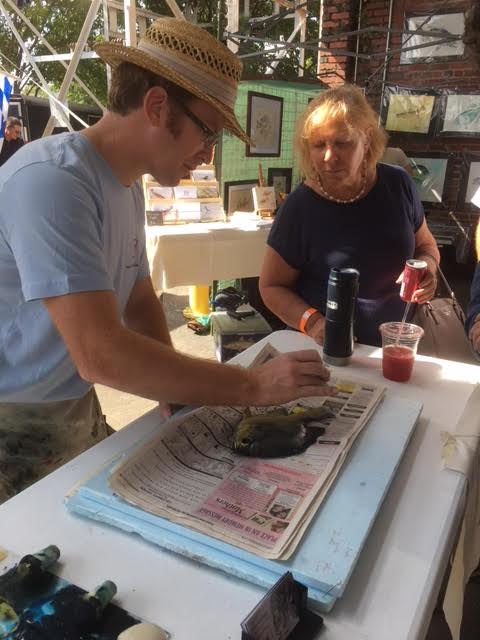 "Finally, the booth shot is what I submitted for the Blue Ridge Arts in the Park juried art festival. I'm stoked to report that I was accepted and this Memorial Day weekend (2017) I'll be slinging fish prints in Fannin County, the trout capital of Georgia. Stop by if you're in the neighborhood and see a fish print demo." 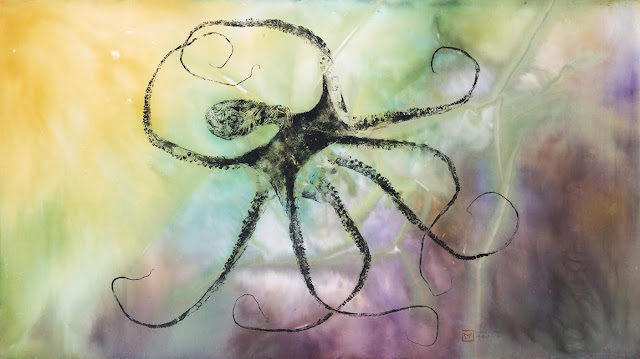 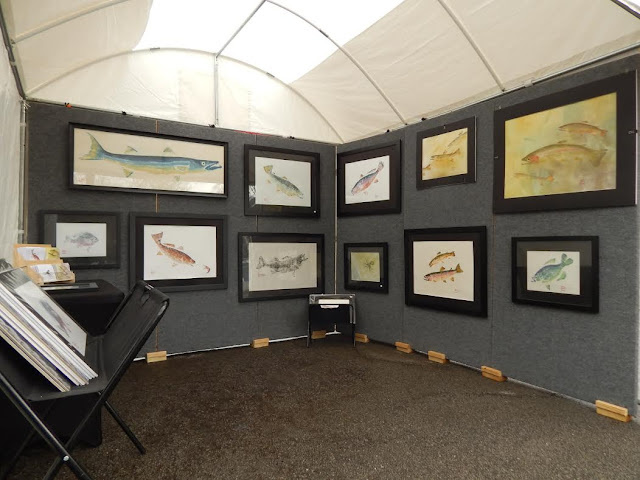 Visit The Mighty Bluegill Facebook, Instagram, and Etsy page for more examples of his work or to purchase a piece of Matt's excellent artwork.