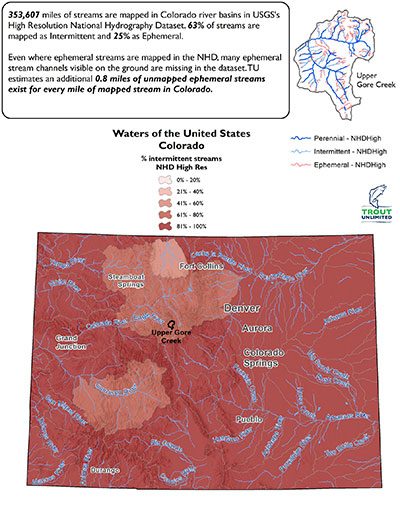 The Environmental Protection Agency announced recently it is finalizing a rule that will drop protections for millions of miles of streams and millions of acres of wetlands, putting watersheds at risk for countless Americans.

“We cannot overstate how far this sets us back when it comes to protecting our water,” said Chris Wood, president and CEO of Trout Unlimited, the oldest and largest coldwater conservation organization in the country. “No one wins when our water supplies are polluted. Allowing chemicals or waste to be dumped into headwaters during the dry part of the season harms the people who live downstream when the rainy season comes.

“You can bet on gravity every time. Whatever is in our headwaters will ultimately end up in our own backyards. Headwaters and wetlands are some of the most important components to our network of streams and rivers. They’re like the capillaries in our bodies. If they’re unhealthy, so is everything else. Americans should not, and will not, allow our water to be jeopardized in this way.”

Finalized in 2015, the Clean Water Rule was the product of years of scientific review and collaborative effort to safeguard some of the country’s most important water resources, including ephemeral streams – small streams that may only run part of the year or with a large precipitation event. These headwater streams along with isolated wetlands provide a vital role in storing and filtering water. Both also provide critical habitat for fish and wildlife.

The new rule would eliminate Clean Water Act protections from millions of miles of small headwater streams, and millions of acres of wetlands. This action would curtail common-sense oversight of many currently regulated activities, such as oil and gas development and pipelines.

“One major issue with the proposal is its lack of analysis using good map data to show which streams are subject to the rule change,” said Kurt Fesenmyer, who, with the Trout Unlimited science team, dug into the data the administration was using to write the policy. (See their interactive map here.) “That makes it hard for anyone, whether the administration or the public, to really understand the potential scope of what is at stake.”

But even with conservative estimates, the impact is significant. For instance:

Today’s decision is a final rule. There is no further public review or comment period.  Thus, legal action may be the next recourse. While we are giving the final rule a careful review, TU, may have no choice but to join other conservation groups, states and communities in turning to the courts to challenge this harmful rule.

“Good policy isn’t just about politics or pleasing a particular constituency. Good policy should help people and communities and have a basis in truth and fact. This fails on both accounts,” Wood said.

How Did We Get Here?

When the Clean Water Act was passed in 1972, it protected virtually all of America’s waters–every type of stream, wetland, river, lake or bay. A 2001 Supreme Court decision first questioned if all wetlands and streams should in fact be protected–and the issue has become ever-more politicized since then.

In 2015, under President Obama, the EPA finalized a rule (the Clean Water Rule) clarifying that the Clean Water Act protects all of our nation’s streams and millions of acres of wetlands. The rule gained strong support from sportsmen, scientists and the public, but it was opposed by a powerful coalition of agriculture and development interests.

Early in 2017, President Trump directed the EPA to first rescind and then replace the Clean Water Rule.  EPA’s “rescind rule” was finalized in 2019 and is being litigated by conservation groups and states. The new rule finalized today, is an unwarranted effort to replace the 2015 Rule, and constitutes an historic roll back of Clean Water Act protections. The new rule is NOT based in science and is NOT consistent with the goals of the Clean Water Act. The new rollback will undermine long standing protections for wetlands and small streams and it will harm hunting and fishing in America.

Why should sportsmen care?

The Clean Water Act and the 2015 Rule are vital to TU’s work and to anglers across the nation. Whether TU is working with farmers to restore small headwater streams in West Virginia, removing acidic pollution caused by abandoned mines in Pennsylvania, or protecting the world-famous salmon-producing, 14,000-jobs-sustaining watershed of Bristol Bay, Alaska, we rely on the Clean Water Act to safeguard our water quality improvements.

TU members, and sportsmen and women nationwide, want to move forward with progress on cleaning up our nation’s waters, not go backwards. Thus, the Clean Water Act needs to be improved, not weakened—the as was the case in today’s proposal.

Trout Unlimited is the nation’s oldest and largest coldwater fisheries conservation organization dedicated to conserving, protecting and restoring North America’s trout and salmon and their watersheds. Follow TU on Facebook and Twitter, Instagram and our blog for all the latest information on trout and salmon conservation.